Development of optical fiber technology is considered to be a major driver behind the information technology revolution and the tremendous progress on global telecommunications that has been witnessed in recent years. Fiber optics, from the point of view of telecommunication, is now almost taken for granted in view of its wide-ranging application as the most suitable singular transmission medium for voice, video, and data signals. Indeed, optical fibers have now penetrated virtually all segments of telecommunication networks, whether transoceanic, transcontinental, intercity, metro, access, campus, or on-premise. The first fiber optic telecom link went public in 1977. Since that time, growth in the lightwave communication industry until about 2000 has been indeed mind boggling. According to a Lucent technology report, in the late 1990s optical fibers were deployed at approximately 4800 km/hr, implying a total fiber length of almost three times around the globe each day until it slowed down when the information technology bubble burst! The Internet revolution and deregulation of the telecommunication sector from government controls, which took place almost globally in the recent past, have substantially contributed to this unprecedented growth within such a short time, which was rarely seen in any other technology. 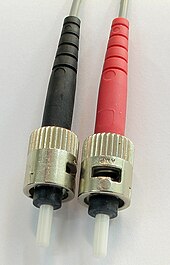 An optical fiber  is a flexible, transparent fiber cable made by drawing glass (silica) or plastic to a diameter slightly thicker than that of a human hair. Optical fibers are used most often as a means to transmit light between the two ends of the fiber and find wide usage in fiber-optic communications, where they permit transmission over longer distances and at higher bandwidths (data transfer rates) than electrical cables. Fibers are used instead of metal wires because signals travel along them with less loss; in addition, fibers are immune to electromagnetic interference, a problem from which metal wires suffer. Fibers are also used for illumination and imaging, and are often wrapped in bundles so they may be used to carry light into, or images out of confined spaces, as in the case of a fiberscope. Specially designed fibers are also used for a variety of other applications, some of them being fiber optic sensors and fiber lasers. Being able to join optical fibers with low loss is important in fiber optic communication. This is more complex than joining electrical wire or cable and involves careful cleaving of the fibers, precise alignment of the fiber cores, and the coupling of these aligned cores. For applications that demand a permanent connection a fusion splice is common. In this technique, an electric arc is used to melt the ends of the fibers together. Another common technique is a mechanical splice, where the ends of the fibers are held in contact by mechanical force. Temporary or semi-permanent connections are made by means of specialized optical fiber connectors. The field of applied science and engineering concerned with the design and application of optical fibers is known as fiber optics. The term was coined by Indian-American physicist Narinder Singh Kapany, who is widely acknowledged as the father of fiber optics.

No Saul or Chiesa – but can Liverpool afford to ignore need for midfield and forward signings this summer?